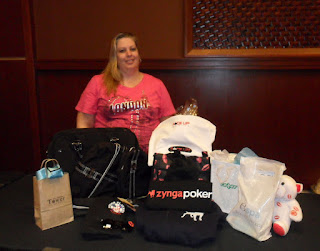 On July 1, 388 Ladies competed in the 2012 LADIES LIPS CHAMPIONSHIP! After nearly 24 straight hours of play, Tonya Baltazar (My wife) went got through a tough final table including professional poker player, Karina Jett, and got heads up with Tamara Cruz of Arizona...After tough heads up battle, Tonya came up short to finish in 2nd place...I took some time to interview my wife about battling through a VERY tough field:

Q: What was your initial strategy going into this tournament??
My strategy in an all women poker tournament is very different than when I play an open event with men.  I find women are harder to bluff.  I always maximize the value of my good hands and flops that I hit because women will tend to call you down if they hit any part of the board.

Q: Was there a hand or hands you played that indicated that you were in for a long run??

I just moved to a table and I had about 35,000 chips, I just played the blinds and then on the button I had J 10os everyone folded to me so I made a standard 3 times raise, the lady in the SB reraises me but only doubles my initial raise so I call.  The flop was  A K Q, I flopped the nut straight, lady in SB bets out so I go ALL-IN and she instant calls me and she turns over pocket 5’s and I double up.  I’m not even done stacking my chips and a lady UTG raises, everyone folds to me and I look down at  pocket Aces so I announce ALL-IN and she instantly calls me with pocket Queens and I double up again.  A few hands later, I get A J hearts and this lady raised and I call, and I think the BB called too, the flop is K 10 Q, BB checks the initial raises makes a continuation bet and I announce ALL-IN BB folds and she instant calls and she has K 10 for two pair and I take her out.  I went from 35,000  chips to over 200,000 at that one table.

Q: You had a mountain of chips with two tables left, but lost a big pot to eventual winner, Tamara Cruz, how did you overcome when you got to the final table:

Well I am a Short Stack Ninja Specialist, I know how to play a short stack well.

Q: Talk about your double up against Karina Jett early at the final table.

Well I have played with Karina before and have taken a WSOP boot camp that she taught with Annie Duke, so I know her style of play and what her hand ranges would be.  She was one of the chip leaders going into the final table , but she did double me up twice, which was nice.

Q: I know there were issues with the tournament playing out the tournament in one day, I heard not just yourself but other players had an issue with it, please explain your stand on this issue?

Yes, it was complete craziness, they changed a lot of things this year with the Lips Championship than the years before.  It was the Golden Nugget’s decision to make it a 1 day event this year even though in the past years it was a 2 day event, and this year was the biggest turnout that Lips had a record of 388 women.  It definitely should have been a 2 day event.

Q: Fatigue played a major part in not just you but your opponent, how did you maintain your compusure in the end?

I drank a lot of starbucks coffee!

Q: Finishing 2nd is a great accomplishment, can you put into perspective how important this tournament was for you??

First of all, I have played the Lips Championship for the last straight 5 years and was always close to the money or bubble girl, so to actually get this far and finish 2nd was just one of the greatest accomplishments that I had in poker besides my two cashes in the World Series of Poker in 2010 and 2011.

Q: How was your support able to get through this tough tournaments such as your friends and family??

I truly have the most amazing husband who not only taught me this great game, but always supports me and encourages me to be a better player, he is my ROCK!  I also have the most amazing friends that I have met because of poker, who will be long life friends, and who are always my cheerleaders not only in poker, but in life!  Poker is just not a game to play for money, but it’s a great way to bond and have fun with the people you love.   I am truly blessed to have such a wonderful husband, kids and friends who support my passion for poker.

Q: What poker goals do you have left to accomplish??
My next goal is to play in the Main Event at the World Series of Poker and to make it the final table, but if I cash in the Main Event, I will be just as happy…I will be working on that goal this coming year in my 10K league.

Thank you for the interview.....