Let's start this blog with a short clip from one of the best movies I've ever seen....BOYZ IN THE HOOD! ICE CUBE was surprising very good in this movie. I think it was his first movie role:


Today, I'm at work, eating lunch, and at the table next to me a group about 10 people were sitting and standing around playing dominoes! Actually 4 were playing and 6 are watching. I think they work in the Linen/uniform department. This domino game goes on every day between 12:30 PM - 1:30 PM, and I've always noticed this game, but today was the first time I really took note of it. The one thing I noticed about this game is how happy everyone is. This group, as I said before, it usually 10 people, who rotate after every game so that everyone gets to play. The game is raucous and loud, and good-natured needling going on. There are times when this game gather's 20 people who just want to see what's going on...The happiness these people show is definately palpable -- you just can't help but smile when you see these guys truly enjoy themselves away from the hustle and bustle of a workday. 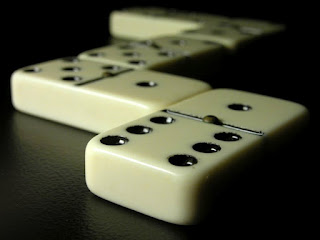 I LOVE PLAYING DOMINOES!!! When I was in the Air Force, I played it wherever I was stationed. The first time was with a group of airman when first joined in our dorm rooms. We would play throughout the night, time would fly, beers were flowing, it was an awesome time! I remember when I was working for the Security Forces Squadron in Nellis AFB, NV, I used to fix computers and each time I was on a call....I would always see a group of airmen playing dominoes, wishing i could stay to play a game....damn I miss times like that.

I also remember in high school. Lunch time was always domino day! A group of students, one of which, played in the NFL for short time, would always get as many games in the 30 minutes as possible. It got to the point where everyone was bringing their own domino sets to school. I remember one guy had an elaborate set...I think he said it was made from ivory tusks of elephants worth 200 bucks, not sure if I believed him (Teenagers always exaggerate). Funny cause soon it became a race to see who had the best domino set...lol

Now, I rarely play dominoes. I have a set sitting in my game closet, and occasionally, my wife and I will pull out the "bones" and get a game in...but today has really got me thinking, maybe there's an Apple App where I can people from all over the world. Heck, maybe Zynga (Makers of Words and Scramble For Friends) has developed a domino game...

Guess it's time to look for one :)