Poker is funny game. One day, you're on top of the world. The next day your scrapping the bottom of the barrel. 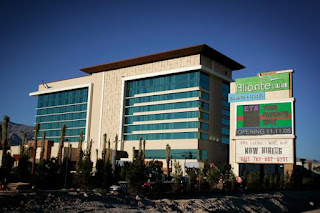 Had a late-night session at the Aliante Casino $1-$2 game and ran so bad and disgusting it was beyond words. I lost two buy ins basically on two hands SET OVER SET both times!!! If you've played enough poker you know the worst feeling in the world is being on the negative end of a set of set. I don't think I played either hand wrong, it's just so disgusting that it happened to me twice in one night and for my entire stack twice!! Oh well.. 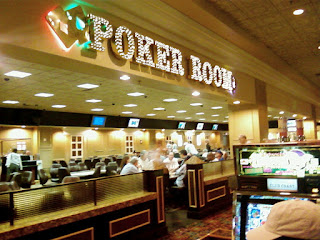 I got a great set of cards!! AA, KK, QQ JJ, 10'S!! One a few occasions I got them two of three times, but after 2 hrs, I lost my entire buy in of $140!! Of all those premium hands I think I only won 2 of them!! And to put salt in the wound..I had this old fart, slow roll me for a big pot, which really pissed me off. I had it out with this guy! I was very angry, almost to the point where I wanted to fight, but what would that solve? All I know is the Orleans crew is a group of the most misarable people I've ever been around. It reminded me of my trip to The Bicycle Club in Los Angeles a few years ago, where almost every hand, people were yelling at each other, the dealers, the floors, the chip runners, the porters, anyone who would go in their way. I really don't like playing at the Orleans, but the games especially the limit games are extremely juicy, so I tolerate, but that day, I couldn't get anything going with none of my hands holding up...Again..oh well... 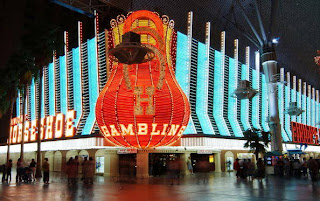 The day after that, I decided to play the Binions 2PM Deepstack, and despite being card dead, I managed to make a mid-cash. I played extremely well throughout the tournament, making minimal mistakes (Although I made a horrible all-in call with J8 suited). One of the highlights of the day was meeting Rob of http://robvegaspoker.blogspot.com/  He has one of the most entertaining poker blogs in the blog-sphere, feel free to read it, you'll definitely enjoy it.

Now it's time to brag...Probably the best hand I played in a long time. It also cemented the fact that despite my bad run of poker lately, I still believe I'm a good poker player:

Forgot what the blinds were, but player opened limp from middle position out of a 40kish stack and it's folded to me in the BB and I tap the table holding 10-4 offsuit. I have around 74K...The flop comes 5 5 4 with two hearts...With one player who just limps, I wanted to see where I was so I lead for 2K...He calls. The assigned him a range of small pairs and suited connectors...The Turn is a Q diamonds...I didn't think this card fit my opponents range, so I decided to bet again..this time 5K...He calls again...At this point, I eliminate pairs from his range and sqaurely on a draw heart flush or straight draw...The River is a A of hearts, completing the flush..I check...My opponent quickly shoots out 12K. This was a little bit over a pot-sized bet....I thought about a flush, but I just didn't believe my opponent would continue with a flush draw especially with the paired board. From the hands I've seen him played, he seemed like a solid player who wouldn't chase too much, but then again...what possible holdings could I possibly beat...7 6 was the only hand I could beat giving the betting action. I really didn't believe he had an ace cause he just didn't make sense that he's calling the entire was with an Ace in his hand unless he had some hand like A2 and got lucky, but then again it was possible to have that hand....I decided 7-6 was his holding..I took a deep breath, cutout 12K from my stack and relunctly shoved it towards the pot.

After the tournament, My confidence in my poker ability was sky-high...sometimes I can't let the awful results of my cash games affect my thinking on a poker level.  I know I'm a good player...just got to continue chugging along and believe in myself...yeah, from time to time, you'll have doubts but if you believe in your ability the results will come.


This Friday, I'll be playing the first event of the BINIONS CLASSIC...the $110 Employee Event, I'm looking to play well and run well...wish me luck!!

Love reading your blogs. Keep up the good work & good luck in the tournament!