"Having little or importance or significance"

I truly believe in the saying "Don't Sweat The Small Stuff" If you do, you'll go insane trying to satisfy your ego. I had an incident over the weekend and truly defines the word, "PETTY" and a gentlemen who obvious sweats the small stuff.... 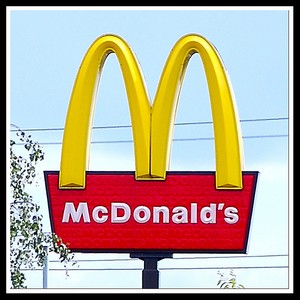 Just had a lovely dinner with my wife and daughter and decided to have a little McDonalds for dessert. Before I get my messages flooded with "Aren't you on P90x?? What's going on??" The dessert for my daughter and wife, I didn't have any of it..Not even a bite...lol.

The drive through at McDonalds has two lanes (Not sure why)...so I ordered a shake and sundae, pulled behind a car about to pay when I heard this voice to my left"

I looked to my left and saw this gentlemen in a white truck sticking his head out and waving his arms in the air...Again, he repeated,"

"Hey Bro, You know I'm next"...This time he was a little more demonstrative in his voice and hands...

Then this guy barked back," Hey Bro, just want to make sure you know that I was next"

My shocked turned to irritation and little anger," Hey man, if you're really want to go first..I'm not gonna sit here and argue with about MCDONALDS!!"

Again this guy's voice rose,"I'm not arguing, bro. Just wanted to make sure you know that I'm next"

At this point was pretty angry, I couldn't believe I was agruing with his asshole about who's going to get their McDonalds first!! With my daughter and wife with me, I wanted to diffuse the situation as quickly as possible..So backed up the car.

"Okay dude," I said as I backed my car, "There you go...you can get you're McDonalds first"

I started laughing, which I don't think the guy appreciated, but I didn't give a shit..didn't want to get into a pissing contest with this asshole...Anyway he pulled in front of me, and I could hear him cursing at me...I could see his wife trying to calm him down, but this guy obviously had issues cause he was still steaming...

My wife and I got a good laugh out of it...You just go to do that when you run into situations like that...Just bite your lip and laugh....I did...I'm sure that asshole's big Mac's tasted a little bitter thinking about that guy who cut in front of him AT MCDONALDS!!!!

And that my friends is what we call....PETTY!!!