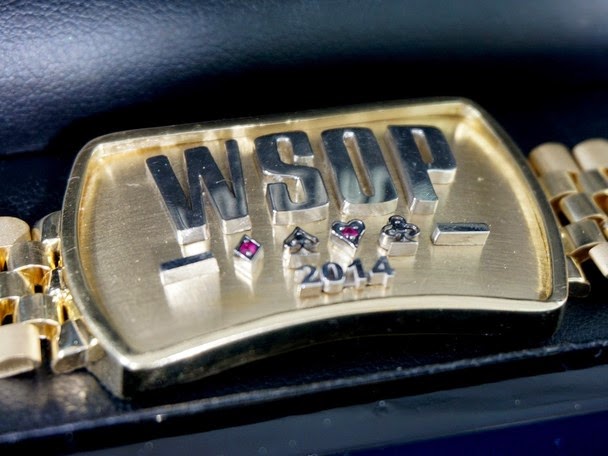 During this 3 part series, I'll delve into my Summer Poker Series giving you insight to my journey through the Las Vegas tournament scene which becomes the center of the poker universe from May to July. Poker players, Pro and amateurs alike flock in numbers dreaming of gold bracelets and winning life changing prize money...Of course, I'm one of those people.

I decided early in the year I was going to play some of these Summer Poker Series Tournaments (As much as I can play). In the past, I've done pretty well. Back in 2010, I chopped a Caesars Mega Stack for over $3,000, and last year I chopped the first Binions Classic Tournament for over $2,000, I've had a couple of small scores earlier this year, nothing to brag about but still profit. More importantly, my confidence in my tournament poker game was sky-high

Part I, I'm going to give my experience in the EVENT #1 of the World Series of Poker -- The Casino Employee Event...

I've played the WSOP Employee Event twice before, but I haven't had much luck. I took a 7 year hiatus, but this year I decided to give it a shot. The Buy in is $500, 60 minute levels, and 3000 Chips. My strategy going in was to try to build my stack to 7,000 by the time the antes kick in - Therefore, I'll have enough to chips to be able to maneuver and be creative going forward. So my strategy was to see a lot of flops and hopefully I'll be able to hit some hands and wins some good pots.

The World Series of Poker is the center of the poker universe, it's the mecca of poker players -- a little like heaven with a lot more baseball caps. As soon as you enter the World Series of Poker area the energy is so palpable -- the buzz is incredible. The click of ships rattling in the hands, the smell of the money floating in the air, and you hear every bad beat story ever told as you walk down the halls: I had AK, is always how it begins.....

I enter the hallway and instantly feel the energy. I spot one of my co-workers and wish him good luck before I enter the Amazon room. I find my table, observing two people already sitting down. I don't go right away. I'm very superstitious when it comes to tournament, and I always wait until a minute before the cards are scheduled to be dealt before I sit down. So I walk around, and you can feel the buzz of anticipation around the room. Players, Floors, dealers, and cocktail waitresses are mingling around this enormous Amazon room, dodging each other like some maze. You can feel and see the excitement hovering over the entire room....it's spectacular to be at the center of it.

As game time approaches,  I finally grab my seat (a minute before noon) and get myself situated. I don't recognized anyone at my table until a female dealer who temps for our poker room occasionally sits in a Seat #6. We're not close, and I'm not going to pretend we're buddies so we don't acknowledge each other. Finally, WSOP tournament director, Jack Eiffel approaches the podiums and welcomes everyone to the start of WSOP 2014. Then after the typical introductory salutations are done. He says these words, "Do you guys like money?? Then we hear a huge explosion and all of a sudden money starts falling the ceiling. I didn't realize what was going on at first until the first $1 bill fell on the poker table and people starting grabbing the money raining down on us! I thought, "Shit!" Then I began rummaging, grabbing as many $1 dollar bills as I can. It was an amazing site as 800 people were on their hand and knees grabbing all this money. In the end, I ended up with only $28: 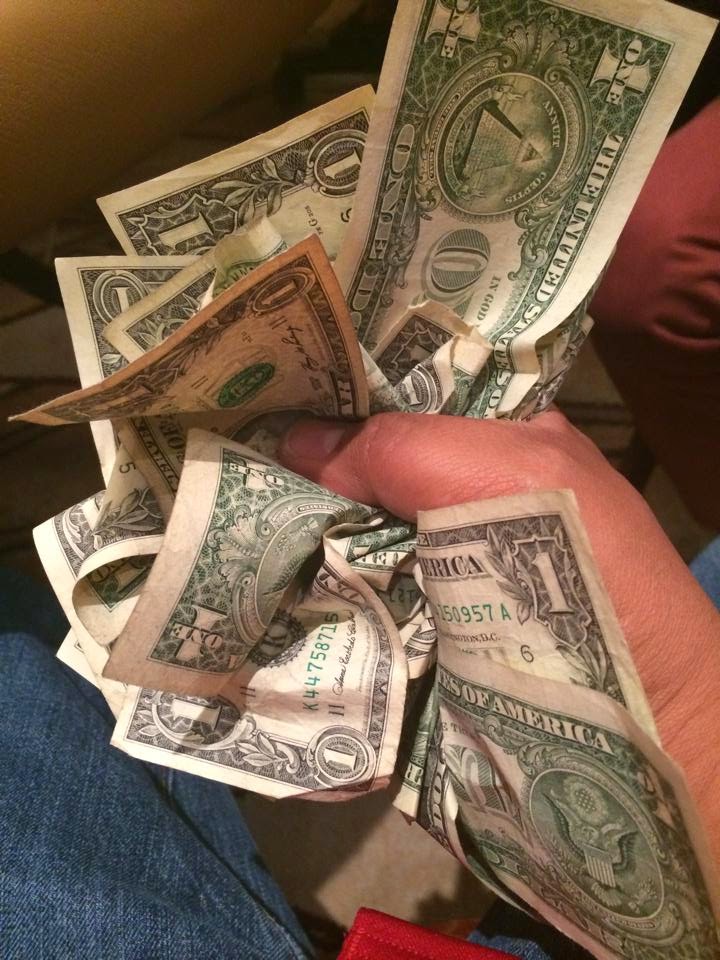 Other than the obvious, the money grab was a well-timed stress reliever for not only me but for a lot of players in this tournament. I know there was a lot of laughter and good natured conversation about what just happened and it was definitely what was needed. Moments later, the moment of truth arrived as they told the dealers to shuffle up and deal. I took a deep breath, fired up about the journey I was about to take.

I knew it would be a tough hill to climb. As evident by the "Seat Open" i heard a couple of minutes into the tournament. I knew I had to get lucky, play well, but more importantly run incredibly hot for a long time.

Unfortunately, I could never get anything going. For the first 2 levels, I was playing a ton of hands, but couldn't connect with any flops nor could I find any spots to get my chips where I feel I had the best of it. It was frustrating, but I kept the faith hoping I could get a hand. Right before the first break I managed to get my stack to above starting when I hit top pair with 98 off suit and got someone to commit her entire stack with a flush draw. So at first break I had 3400. So despite not getting any hands, or any good spots to put my chips I felt pretty good.

After the break, things starting falling apart.  Two hands in particular was my down fall:

HAND ONE -- At this point, my blinds went through once and I played a couple of hands so I was down to 3100. Everyone folds to me on the button and I hold AJ offsuit. Very strong hand. I raise to 450. Small blind whose been going all in frequently after losing half his stack early and rebuilding since then goes all in for 2500. After tanking for a minuted, I folded my AJ. After the hands hit the muck, I knew I made a critical error. After my raise I was left with 12 BB with the blinds 100-200. There was no way I should have folded that hand with my stack at a critical stage. Even if I knew all-in range included AK AQ, JJ, AA, KK, I had to take a chance. If I win the hand my stack would grow to around 5000 which would be give more breathing room and give my extra ammunition to try to get to my target stack of 7500! Even if I busted there, at least I gave my opportunity to chip up with a very good hand in an excellent spot.

HAND TWO -- With my stack decimated to 2200. I was in the Big Blind (BB) Action is folded to an aggressive Asian lady who raises to 500. Small blind goes all in for 1600. I look down and see 55. I hesitated for a moment then moved in over the top for the rest of my chips. Asian lady folds. Small blind turns over 88, flops a set, and rivers quads, and my stack neutralized to 900 chips. My thought process behind going all in. I have a chance to get my stack to about 4400. What I didn't take into account was my raise was the 4th raise in a spot where my 55 wasn't the best hand. Even if the small blind was moving in with a hand like 66-99, I was still way behind, and in if the initial raise called, I'd have to beat two players with a marginal hand. If I wanted to make that play with 55, I should have been the first one in rather than the 3rd player in. Despite the results this was definitely the wrong move in the wrong spot. Even if had somehow won the pot, the play was a -EV and should never been done. My wife and I had an argument about this hand, and of course I was stubborn and felt I made the right move, but thinking about more and giving myself a few days to think about I know now it was the wrong move.

A few hands later, I stuck my last 900 over an initial raise with AQ, the big bling had AA and the initial raiser called with 99 and nailed a 9 to knock us both out. Thus, ending my dreams of winning the coveted WSOP bracelet.

Despite the sickening thud of being eliminated and how badly I played towards the end, I have no regrets about playing this tournament. I told myself as long as I'm a casino employee I'll play this tournament every year. I know I'll learn from my mistakes and hopefully I won't make these same mistakes in future tournaments.