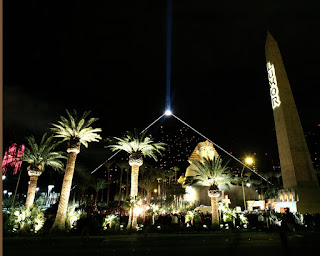 Poker is a social game. Poker is a people game. More importantly, poker is a "take as much money from your opponent as possible" game. However, there are times where you play people you don't want to take money from, but the circumstances drive you too....

Few weeks ago, I had the pleasure of playing $1-$2 No Limit at the Luxor with 3 bloggers, who I have the absolute respect, admiration, and huge fans of their particular blogs: Lucki Duck, Robvegaspoker , and Lightning36. The 3 bloggers arrived at the Luxor about 20 minutes after I was there. I was sitting in a very very very extremely extremely tight tight table!! (Did I mention the table was very, extremely, tight??) Lightning said they had enough to start a new game. At first I was apprehensive about joining the game because I have this thing about playing people I like cause I really don't want to take their money, and in the case of Robvegaspoker and Lightning36, they've been very generous tippers to me whenever I've dealt then, even tipping in small pots when they didn't have too. It was a definite quandary, it's the reason I don't playing where I work, and if I do, I NEVER play at the table if I've dealt it already. It's my belief you shouldn't play at poker room if you work there...it's a "conflict of interest" rule. Yeah, I know it might be a little paranoid, cause in 99% of cases, your regular players really don't care if you play with them, but I usually am uncomfortable if I'm check-raising a guy who tipped 15 bucks the week before...lol

The only reason I decided to join the new table was the table I was at was very very extremely extremely tight tight table!! (I have mention how tight my table was??). The first hours, the table really played tight, but I was enjoying the conversations with my fellow bloggers. We talked about an array of interesting topics, one of which was the whereabouts of "Backpack" Steve, a leech who used to hang around poker room begging for money. When I told them what happened to him, the bloggers, particularly Robvegaspoker was shocked yet not too surprised. It was definitely a delightful time, to the point where I sometimes forgot were in a card game..it was like we were sipping a cold one and shooting the breeze in a bar. But alas, the game of no limit Texas Hold em took hold of two of the us...one of which was me...the other was Lightning36. 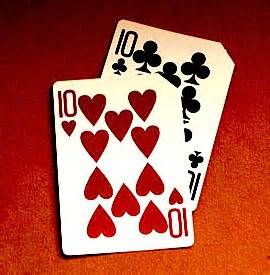 Like many no limit poker hands, the hand started out nonchalantly, A player opened for $12 from a $90 or so stack....I'm sitting two seats later with Pocket 10's and call. My stack was a little over $200. Two more callers behind me, and Lightning in the Small blind calls. So we take the flop five-handed...The flop comes A A 10 A. I actually did a double take...did I just flop a boat?? Lightning, first to act checks, the initial raiser bets $20. Quickly, I raised to $40. I acted quickly because I'm a believer if you flop a monster you act the opposite of what you'd normally do. I see it too much as a poker dealer, when someone flops a monster, they put on the "Hollywood" Act as if they a tough decision to make. I can pretty much tell they have a monster by this act, and I'm almost always right. It's actually helped in my poker playing in identifying big hands and being able to either get away from them or lose the minimum. The 2nd part of this hand is why did I raise on the flop with a full house. My goal to extract maximum value for my hand and with 5 players in a raised pot, there had to be an Ace somewhere with my 4 other opponents, and I wanted to get that Ace to commit this stack to the point as early in the hand as possible where he is forced to put the rest of his chips in the next two streets.

Two players behind me folded quickly, the action was now on Lightning, who tanked. At that point, I knew he had an Ace, and I thought, "Dammit, this is not what I wanted." I wanted one of the other guys sitting with an Ace and Lightning would insta-fold his hand. Lightning hemmed and hawed for a long time, starting at me, playing nervously with his chips before sliding the $40 towards the pot. the initial raiser were all in for another 18 bucks or so. Since it wasn't a full-raise I could only call as did Lightning. The Turn was a 3...Lightning check, I instantly go all-in for around $140. I actually was hoping Lightning would see this as a sign that I had the goods and he would fold, but when he asked how much I had...I knew there was no way he was folding his hand. AFter another minute, Lightning calls....River was a 9....I announce "Full House" and turn over my Pocket 10's...Lightning shows AJ and the other player mucks claiming he had an Ace too.

I had mixed emotions scooping that pot. On one hand I was happy for winning such a monster pot, but felt bad that it had to come in the expense of Lightning. But I don't blame him, he played the hand very well. I probably would have played the hand the same way.  It was just a "cooler" hand that comes up from time to time where hands kind of play themselves. Lightning took the beat very well, and I  was happy when he texted me the next day saying he won his money back at Ballys.

Next time, Lightning comes to town, and stiffs me, believe me I will not be angry about it. I'll shoot him a sly smile and wonder what would have happened if he paired his Jack on the river :)