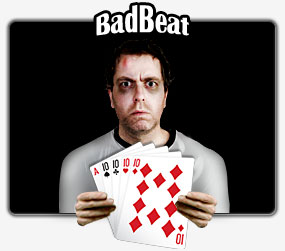 Did I mention how I hate bad beat stories??

As a poker dealer, you hear kinds of stories that people "think" are "bad beat stories. It usually starts with I had "pocket Jacks" or "pocket Aces". Funny how it's all bad beats involves Jacks or Aces...never Kings or queens or 75 off suit. Dealing for 6 years, and hearing countless "bad beat" stories, you pretty much become immune to the next one. After a while, you learn to just nod your head and say, "I know what you mean."

I've been playing for 10 years and dealing for 6 years, and I wanted to take this time to tell you about my all time favorite bad beat story...I've told this story numerous times to other dealers, players, and anyone who wants to hear it...now it's time to tell it to my blog readers. I hope you'll enjoy it as much as I enjoy telling it: 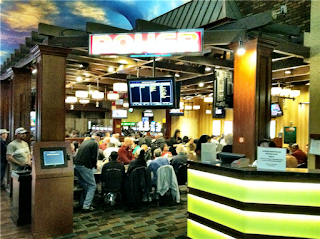 In 2002, I used to play 4-8 Limit at a casino called Boulder Station on the east side of town. It's a 98 percent locals room, which houses probably the juiciest game in the entire city...It's a 4-8 Limit Omaha-High only. The game has been featured in a Card Player article...despite the game being only 4-8 game, there have been times where the game as had as many chips on the table as a 2-5 No Limit game!!

Anyway back to the 4-8 Limit Hold em game..I used to play this game every Friday. No Limit cash games were non-existent in Vegas. At the time, there weren't many poker rooms in the city: Mirage and Bellagio were the big boys. The smaller rooms consisted of Flamingo, Circus Circus, and the old Stardust

Boulder Station is part of  the Station Casinos properties which catered to the local clienteles. At the time, the only station casinos with poker rooms were Sunset, Palace, and Texas Stations.  These poker rooms had a unique progressive bad beat jackpot where if a bad beat occurred (I.e. Quads loses to Quads), not only do the casino where the bad beat occurred gets the majority of the jackpot (I think it was $150,000 at the time)...every one playing in the other poker rooms gets a share. So let's say the bad beat hit at Sunset Station, if I'm playing at Texas Station, I get a piece of the bad beat. Since there were only 4 casinos participating at the time, the player's share sometimes reached in the thousands. The qualifications for the bad beat lowered week when it wasn't hit.

On this particular night, I remembered distinctly cause I had a good night, I think I won about $150, not sure if I played good or ran good, but I was ahead all night. Around midnight, this old gentleman took a seat next to me and bought in for a hundred. I remember him being very tight, and when he was in the hand...he lost pot after pot. I never saw him rake in a single pot...Then it happened...I remember him having 40 bucks when he raised preflop....it's folded to the another player who re-raises...the old gentleman capped it...The flop came K-K-x.  The old man led out...the other player raised...he just called...the turn was another brick...He checks calls...The river brings an Ace...Suddenly the old man bets out...The other guy raises...he old man re-raises...other guys raises again...the old man puts his last 5 bucks....Hands are turned over guy turns over Pocket Kings for Quad Kings, the old man turns over pocket Aces for Aces Full of Kings. The entire table erupts, as the qualification was Aces full of Queens must be beaten... High fives are thrown around the table as if we just won the lottery. The floorman makes the call to the other poker rooms, surveillance had to verify the hand, players from other tables trickle to our table to witness the good fortune and when everything is said and done..The floorman announces that we have a bad beat Jackpot, and because the jackpot took place around 2AM the player share was over $2,000!!! Winning hand gets $10,000. Losing hand gets $22,000!!!...The poker room explodes with utter disbelief and excitement..everyone congratulates the old man, who's grinning ear to ear that never left his face..Mind you he still hadn't won a hand!!!

While the casino gathers the jackpot money, our poker game continues..the old gentleman pulls out another 100 bucks for more chips...Again, the old gentleman continues to lose...I think he played 4 hands after that and lost each one...Finally our money came...They give the old gentlemen his $22,000...and tips the dealer $3,000!! Extremely generous man....and continues to player for another hour...Still he hasn't won a SINGLE HAND!!! I loses another $100, and finally racks up his chips and leaves...

This guy hits the Bad beat jackpot without EVER WINNING A HAND!!!! But I never seen a guy so happy to lose!!

About a month later, they put a picture of him on the wall of fame with previous jackpot winners and if you look closely at this picture, you can see my chips on the right of him, with my $2,000 and two racks of white chips...

It's been a long time since I stepped foot in Boulder Station, so I'm not sure if that Wall of Fame still exsit, but whatever happens in my poker life...that night will go down as the greatest poker night I ever witnessed!!  I don't think I'll ever be a part of something so unique in poker...