REDBIRD CENTRAL -- NOW I KNOW WHY!! -- A Story About one of the most Generous Gentleman I ever met....So I thought. 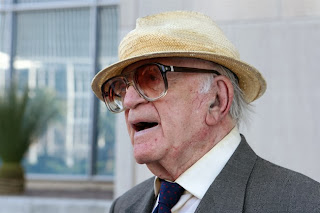 Case in point...Here's two links to a very important legal case that got a lot of attention here in Las Vegas..please read it before you read the rest of the blog, because it'll all make sense in the end...

They Called him Dr. Frankenstien

Why do I care about a crazy Romanian Doctor who defrauded senior citizens and performed his "research" on unsuspecting victims? And what does it have to do with poker?

His name is Alfred Sapse, he doesn't have a lot of ethics, he'll probably die in prison, and he's a GEORGE!

George, in the poker dealer world, is a term for a good tipper. They don't come around very often, but when they do, the poker dealer prays he pushes every big pot to him/her. When a "George" is playing a big pot, and he/she is betting/raising a pot, you get a warm fuzzy feeling inside because if you push him a pot, you'll be sure he'll toss you a redbird...ALFRED SAPSE was that person.

Three years, Mr Sapse used to play in our room every day. When I first met him, he was your typically bumbling 85-year-old, wearing these thick glasses. He seems so absent minded about everything. He insisted he sit in the middle he couldn't see the flop, and don't dare ask for his players card. I remember asking for his player's card and he would wave it off and give me "Are you kidding look?" He was the worst player I've ever dealt too. Talk about a guy who didn't have a clue about the game of poker. If he had any part of the flop, any type of draw, and sometimes not connected to the flop, he was going to the river. As a result, he would put some horrendous beats on the players, and the players would go absolutely nuts, calling him the worst player ever...Mr. Sapse would never say a word as he scooped up a pot. Occasionally, he'd glanced at one of his many poker victims and give them a sly smile.  Another thing about Mr Sapse, I don't think I've ever seen him cash out! No matter how may big pots he won, he would always lose every dime and more...I don't think I ever saw him rack up chips and walk back to the cashier...NOT ONCE!!!

But there was one consistent trait, he ALWAYS tipped the dealers a Redbird, whether he won a $15 pot or a $1,500, he would toss you a redbird, so even though he was a terrible poker player, it was a race for the poker dealers to push him as many pots as possible to they could get those coveted Redbirds. As a poker dealer, putting Mr Sapse on a heater could potential make your day, week, month, and year.

As a man, I don't have respect for him because of the terrible things he did. He stole over $1 millions dollars from these patients, and according to the story, he used that money and lost $700,000 in gambling loses...most of which was probably done at the casino I work at.

Here's my theory of why he was such a terrible poker player..he didn't care about the money. I think he was using the poker room to launder the stolen money through the poker players, and in some sick way, he was tipping redbirds, we the poker dealers became unknown, unsuspecting assailents to his cycle of crime. The thought cracks me up.

When I read the story of Alfred Sapse and his crimes, I was surprised and appalled. I never in a million years with this man I've dealt many hands too could do something this dispecable, but it made me realize you  truly don't know anyone even if you think you do.

Well, I hope he enjoys his last years of his life in prison, and maybe saved a few Redbirds so he could buy favors from the guards....lol